Act I, sc i
My kitchen as I prepare lunch boxes. It is morning.
Me: (to my 12 year old son) Do you want your leftover pasta from the restaurant last night?
12 year old: No, I didn’t really like the sauce.
Me: Really? I thought it was delicious.
12 year old: (pauses) Well, I guess I’m just not really used to homemade sauce.
[Silence]
14 year old daughter: Whhhaaat?
Me: What do you mean?
12 year old: Well, I guess they made it from scratch. I’m just not used to that.
Me: I make sauce all the time.
[Daughter cannot contain her laughter]
12 year old: Yeah, but it’s not homemade. It’s from a can.
Me: Those are tomatoes. In a can. I make the sauce from scratch. It’s homemade. For all of your 12 years, it’s been homemade. What the hell do you think I do in here all the time?
[silence. End scene.]

In some families, you shouldn’t discuss politics, in mine it’s food. Even in this contentious election year, debating which candidate you support would be more pleasant, and certainly quieter, than discussing your choice to put orzo or penne under the osso bucco. Granted, it often feels like all we talk about is food — ultimately, it’s a way of sharing a common experience and checking in with one another.

What are you making for dinner? How was your meal? Are you hungry?

Sometimes, particularly in the face of recent world events, it feels like all we can do is gather around the table and share a meal (I keep coming back to the Joy Harjo poem Perhaps the World Ends Here). As the kids get older and the prospect of sending them out into the world gets closer, those meals, the hard-fought-for pockets of time together and the conversations that evolve, become increasingly valua
ble.

Are you nourished? Are you satisfied? You are cared for.

My daughter is graduating from eighth grade this evening. I feel high school and whatever lies beyond looming as she’s out of the house with school, sports and friends — all things you want for your child, yet wish they’d want to spend just a little more time with you (and, as someone who still has a toddler who I sometimes wish wanted to spend a little less time with me, I feel the full irony of this statement). But, even when my daughter is home, she’s occupied with homework, Instagram, Snapchat, texting and Netflix. She is a good student, an attentive big sister and an engaged and thoughtful young adult, but getting her undivided attention is rare. 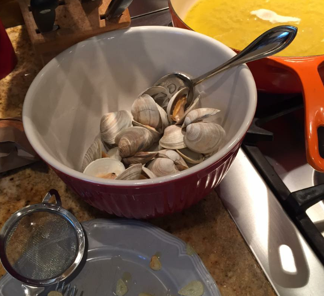 So, in March when she returned home late on a Friday night from an overnight class trip to Washington DC, I was thrilled to see her and even more thrilled that she had been so overloaded with classmates and friends for the previous 40 or so hours that she did not want to look at her phone. My toddler was already asleep, my middle son also in bed, and as soon as he saw that our daughter arrived home safely, my husband headed upstairs as well. The house was quiet with the fresh silence of having just turned off the television, the first floor still warm from the fireplace. The lights were off in the front of the house and only a single lamp was left on in the family room. She looked tired and I had a sudden heartbreaking realization that this is what it would feel like when she came home from college, knowing that we’d be there sooner than I’d like.

“What’d you have for dinner?” I asked. So predictable. She’d had McDonalds and described an equally as undesirable lunch and a bad buffet for breakfast. “I have some leftover clam sauce in the fridge, you want me to heat it up?” Yes.

We stood in the kitchen, talking quietly about her trip. It was too fast, she felt. Too many stops, not a lot of time to see anything. It’s a great city, she said she’dlike to go back. I thought, briefly, about telling her some of my own visits to DC — college roommates and road trips, a part of my life that existed long before she was born — but thought better of it. She showed me some pictures of her and her friends, a mix of girls and boys whose faces were new to me, posing in front of monuments and murals. She sat at a stool at the kitchen island, leaning her elbows on the smooth wooden counter, her body shifted to the side, resting her head on her hand. I stood at the stove as the heat released the garlic. If you’d been outside, looking into our kitchen window just then, I’d imagine the two of us, standing in the softly lit kitchen with the dark house around us, resembled subjects of an Edward Hopper painting. In the silence, the linguine sizzled slightly as it warmed. I turned the pan over, sliding the pasta into a bowl, scraping the bits of clams out of the oil, and placed the bowl in front of her. I watched as she twirled the pasta around her fork.

“It’s ok? Warm enough? You have a drink?” I walked barefoot across the hardwood floor to the cabinet to fill a water glass for her and a wine glass for myself. I returned to the island and stood across from her, resting my weight on on the counter.

“I love pasta at 10:30 at night,” she said with the unpredictable enthusiasm of a thirteen year old. But all I heard was, “I’m glad to be home.”