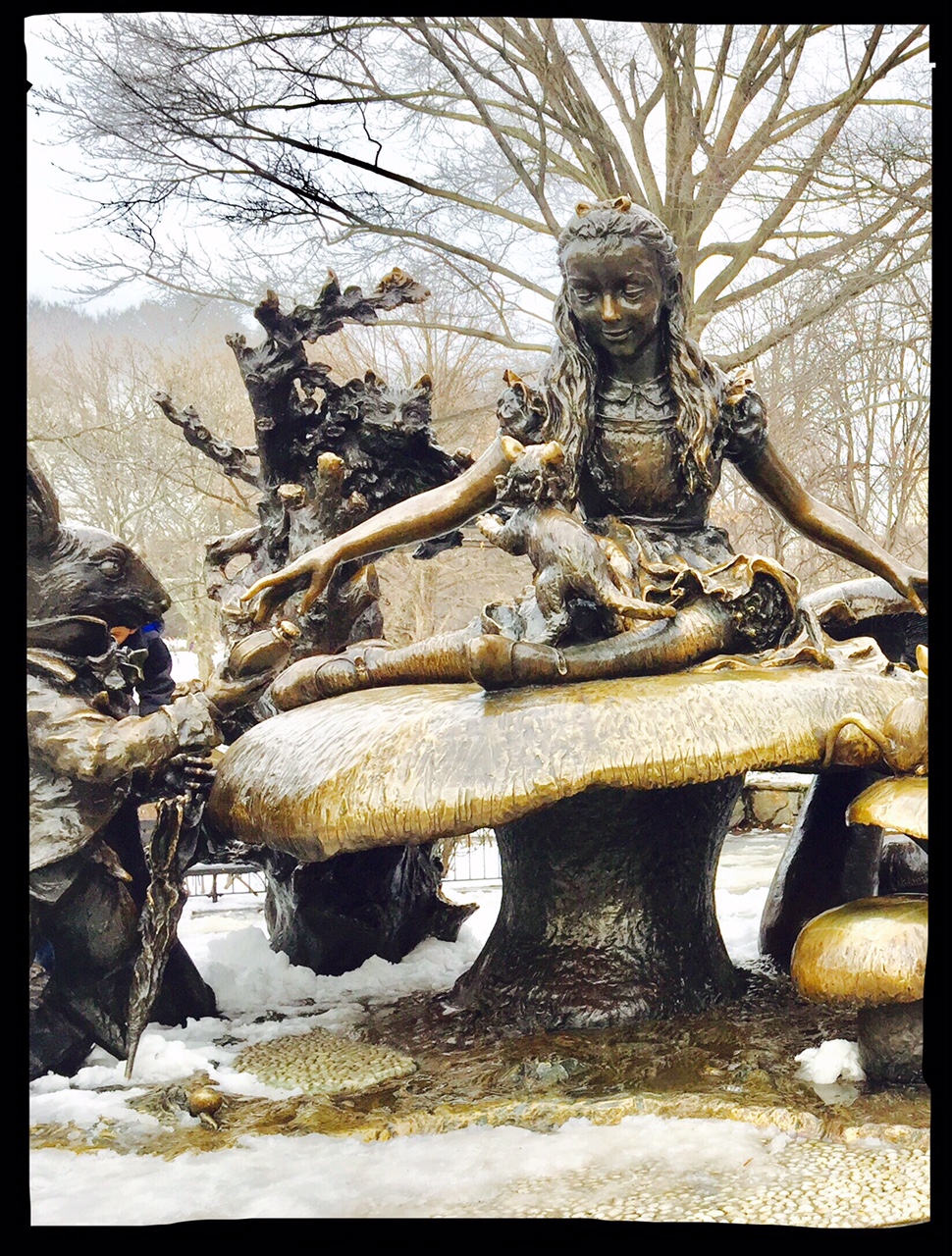 It’s been a month since I’ve last written and if you started to worry that I went missing, in some ways I have. I don’t know if I’m suffering from a winter of discontent, Attention Deficit Disorder, Seasonal Affective Disorder, or just general disorder, but the last few weeks have left me feeling breathless. It has been an unusual season for many reasons. I find I’m easily agitated and unproductive and the tornadic activity of news coverage is not allaying my anxiety or settling me. Instead, I’ve been easily distracted, sucked under the avalanche of fake news and alternative facts, while becoming disheartened by real news and actual facts. I have been caught in the echo chamber of social media — the phenomenon where you’re own views are reflected back to you repeatedly based on your likes and interests — and it’s cacophonous. So much feels at loose ends, with the potential for complete unraveling.

It wasn’t until my family and I took a stroll through Central Park a few days ago, though, that I could pinpoint the feeling. After walking in circles for a few hours, we came to a stop in front of the famous bronze statue of Alice in Wonderland. Eye to eye with the larger than life Alice perched atop a giant mushroom, I recognized in her a kindred spirit. I, too, feel like I’ve fallen down a rabbit hole. As I stood in front of the sculpture, I gazed into Alice’s eyes and whispered, “The world feels topsy-turvy, Alice.” No shit, she answered back.

Usually, when I’m feeling this way, I shift my gaze closer to home — focus more narrowly on my family and the minutia of the day to day. This time, it’s not helping. The climate on the East Coast has, in some ways, reflected the political one, with disorienting and wild swings in the weather — changing from spring-like to winter in a matter of hours, and back again. A week and a half ago, we sat in the park wearing t-shirts and by the next afternoon we were digging out of 8 inches of snow. A few days later, there were strong winds that rattled the windows and took down branches; power in the area was disrupted. I still feel a little tousled by the whole thing. In the midst of this, my son turned thirteen which means we have two teenaged children now. Surreal.

Then, there is my husband on whom I rely for a measured and steadying perspective on life. Though we had a tumultuous election season, with spirited debates, we came through it in tact.  It is one thing to disagree on candidates, however, I’ve since discovered that it is another thing entirely to disagree on music. In a completely unexpected turn of events, my native New Yorker, Staten Island born husband who is usually (and thankfully) predictable, came home with a pick-up truck and, with it, has embraced country music. Though the truck is a practical purchase — we do, after all, own a drywall business — there is something about this truck and this music that makes me feel like Middle America has inserted itself into my very East Coast sensibilities (and I’m not talking about Garrison Keillor’s Middle America, either). It started out innocuous enough. He likes a song with a story and I, too, appreciate the classics of Willie Nelson, Waylon Jennings, Patsy Cline, and Johnny Cash. But, he has gone rogue, listening to more modern country and I suddenly feel like I’m married to a stranger in a ten-gallon hat. It turns out, there is no reasoning with someone who loves country music and there’s no changing the station. As if the ground wasn’t already shifting beneath me, we now ride around town in a pick-up with the twang of country songs as our soundtrack. Doubly surreal.

So, these were the circumstances under which I found myself in Central Park talking to a statue, “I know you’ve seen some wacky things. But country music, Alice? What the fuck?”  My husband was standing next to me whistling a few bars of Waylon Jennings’ “Good Hearted Woman” and I realized then that my plan to get the man out of his truck and back into the city wasn’t working. Maybe I was looking at this all wrong. Alice certainly looked contented enough sitting on that giant bronze mushroom beside the Cheshire Cat. The park visitors around her looked happy, stopping to snap pictures of themselves in the psychedelic scene. Even the creepy giant Rabbit looked kind of stately in his shirttails. Feeling disoriented is just part of the journey. Whether it’s the political climate, the seasonal climate, the teenage years, or your husband’s realization that Merle Haggard is his spirit animal, most situations will shift with time. And though I might look with horror at the radio dial in our truck, I believe that, ultimately, we’re all looking for the same thing: we want some things to remain predictable. We want some things that we can always count on — inner cowboy or not, my husband is just that. A toe-tapping beat with a well-told story may be just what I need to keep me grounded, after all.