Act I, sc i
[afternoon, dinner is on the stove, I am folding laundry]
12 year old: (looking at cell phone) I’m following you on Instagram now.
Me: I know. I saw that you “liked” my picture. Did you read my post?
12 year old: I don’t understand it. Why would you post that? Why do you use those hashtags? I don’t think you know how to use Instagram.
Me: (picking up laundry basket) I’m confused. If you don’t like my post, why would you “like” it?
12 year old: Because you’re my mom.
End scene.

There is finally a slight chill in the air here in New Jersey, which means I can pull my big cast iron pot from the back of the cabinet in anticipation of a season of soups, meat sauce and braises. Aside from trading in a summer wardrobe for clothes that comfortably cover most of my body, this is probably my favorite aspect of the cooler weather. So, tonight I will be making turkey meatball and escarole soup — a weeknight favorite — for the first time this season. Comfort food doesn’t generally elicit feelings of adventure and newfound freedom. In fact, I’m pretty sure it typically has the opposite effect. But, ever since I started making the recipe four years ago, I cannot roll the slimy mixture of ground turkey, egg, breadcrumb, garlic and cheese, without a vague sense that something great is going to happen; something like finding myself in an old haunted Texas bar without children and drinking a gin and elderflower cocktail on a warm afternoon.

I discovered the soup recipe on Smitten Kitchen (an awesome food blog and cookbook) when my youngest was only 10 months old. He was not yet sleeping the night, he was still nursing and refused to take a bottle. He also had a finicky palate and was not yet over a severe and prolonged case of separation anxiety. As a seasoned mother, this all felt like a kind of parenting fail: somewhere along the line, I should hav 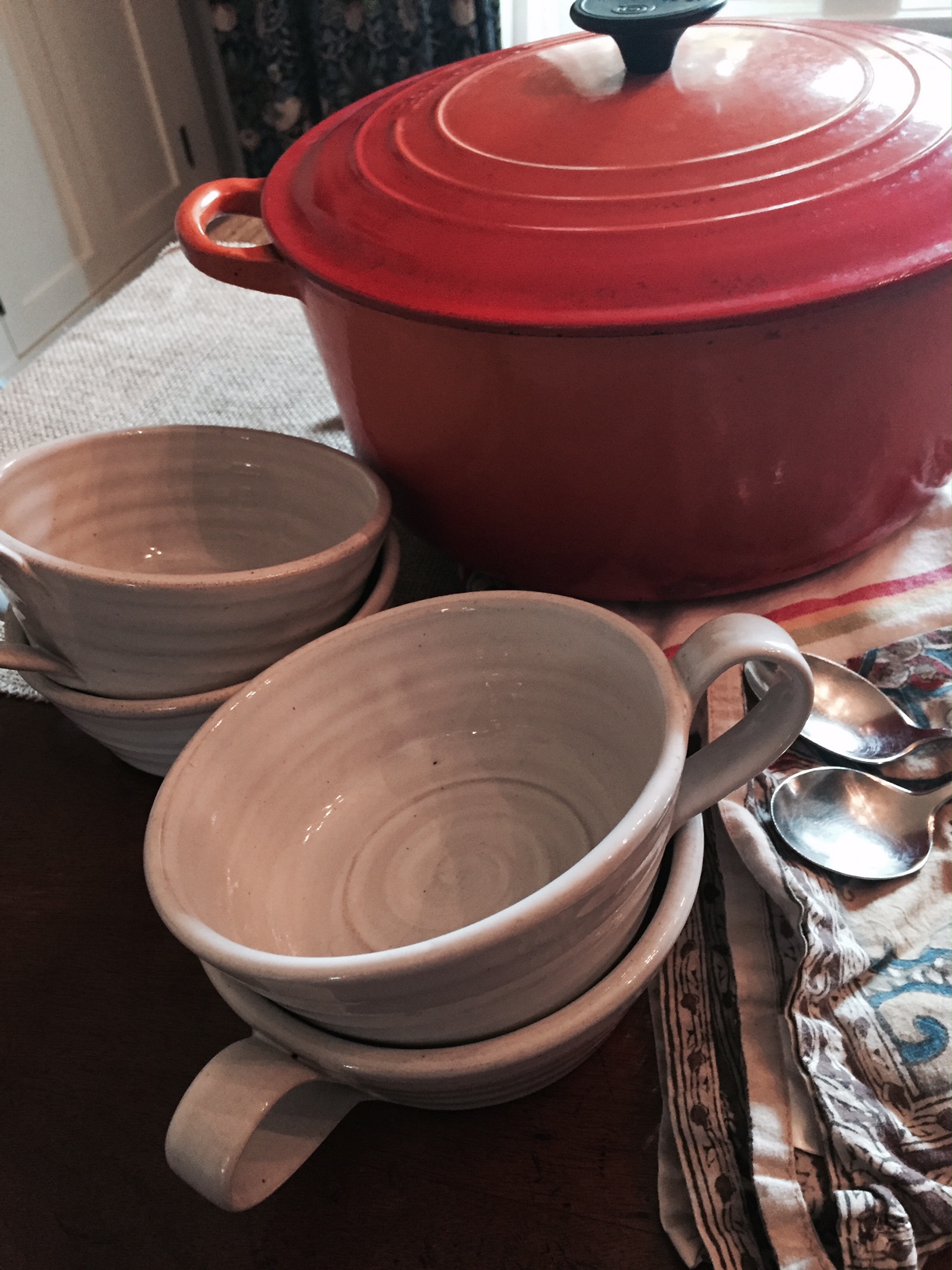 e known better than to allow any of this to happen to a third child. In just a few weeks, as he would turn 11-months old, I was hoping to get on a plane by myself to meet my husband in San Antonio, Texas. My husband would be between conferences for work. We would spend three days together, then he would fly to a meeting in Colorado and I’d fly home. My parents would be staying with the kids, including the sleepless, not-yet-weaned, bottle-hating baby. It was 2012, and within the year prior, we’d lost my father-in-law to cancer, moved, and had a baby. It was the first time in more than five years that my husband and I would be going away without any children and the first time I would be leaving the baby for more than a few hours. Though I was looking forward to it, I also had all of the neurotic concerns of a sleep-deprived mother leaving her children: What if the baby cries for three days straight? What if my father, who would be alone with the baby for at least the first day, locks himself out of the house and the infant in? What if the dog escapes? What if my father sets the dog free? What if I die in a plane crash? Was I, with my New York values, really willing to die for a visit to the reddest state in the union? Was I that desperate for some cocktails and time away from my children that I was willing to chance leaving my sleepless baby motherless and starving?

The answer was yes. And, since I’ve obviously lived to tell the tale, I can say it was totally worth it.

But back to the soup I am making tonight. It is indeed comfort food, hot and filling. The recipe is one of those that looks very easy but has a few extra steps that make preparation take just a little longer than expected. Unlike traditional pork, beef and veal meatballs, they are only about an inch in diameter so one pound of turkey takes on a biblical quality of loaves and fishes, a never-ending bowl of ground meat. After assembling all of the meatballs, they should sit in the fridge for 30 minutes so they hold together while they cook. Once on the stove, however, the labor is done and the soup fills the house with the savory aroma of chicken broth and cheese. The orzo cooks right in the pot, giving the soup a creamy, starchy texture and the thinly sliced carrots offer a shot of color and sweetness in the salty broth. To this day, the kids love it even if they remove the escarole and hang it like wet laundry over the edge of their bowl. Most importantly — and here’s the magical part — the first time I cooked it, the finicky baby ate it up. The diminutive meatballs and little carrot coins were perfect for a pincer grip and he jammed meatball after meatball in his mouth, orzo sticking to his chin, hands, high chair and face. I don’t know if it was the carbohydrates or tryptophan, but after eating this soup, he slept through the night and I felt like I had found a restorative elixir — a ticket to freedom after weeks of worrying if I was actually going to be able to get on an airplane and leave.

Sometimes, before traveling people make sure their affairs are in order, the house is neat, the sheets are cleaned. Sometimes I do all of these things too. On this particular trip four years ago, I felt no sense of order but I bought three pounds of ground turkey and prepared meals I would not be there to share. I spent a day elbow deep in egg and meat, and made dozens of tiny meatballs. I cooked them and froze them, left a key with a neighbor and got on a plane.

Even though my husband and I have taken a few trips since, this was the trip that restored some fun in our relationship on the heels of a trying few years. Admittedly, I feel no less neurotic when preparing to travel without the kids but leaving something I’ve cooked makes me feel a little better. The baby is now four and could probably run the house without me anyway — even keeping his older siblings in line. I’ve made the turkey meatball soup many times and each time I think about the changes we endured at that point in our lives and the need for adventure amidst the daily drudge. Who knew that escarole soup could spark memories of strolls along the San Antonio River, of an unplanned drive to Austin, or of boot-scootin’ bars and cold beer? Or that comfort food in its truest form could remind me that sometimes you have to make a plan, leave a freezer full of food and get the heck out of Jersey? The messiness — sleepless children and crazy dog — will still be here upon return, and I know they’ll be well-fed.