Act I, sc i
[in the kitchen, I’m making coffee. 4 year old runs in, I don’t look up from coffee pot]
4 yo: I’m a superhero!
Me: (still not looking at him) Mmmmmhmmm.
4 yo: I’m Naked-Man!
Me: (looking up, I see that he is, indeed, completely naked)
4 yo: Naked-Man doesn’t even wear a cape!
Me: (nodding) Makes sense…. and I worry for your college years.
end scene. 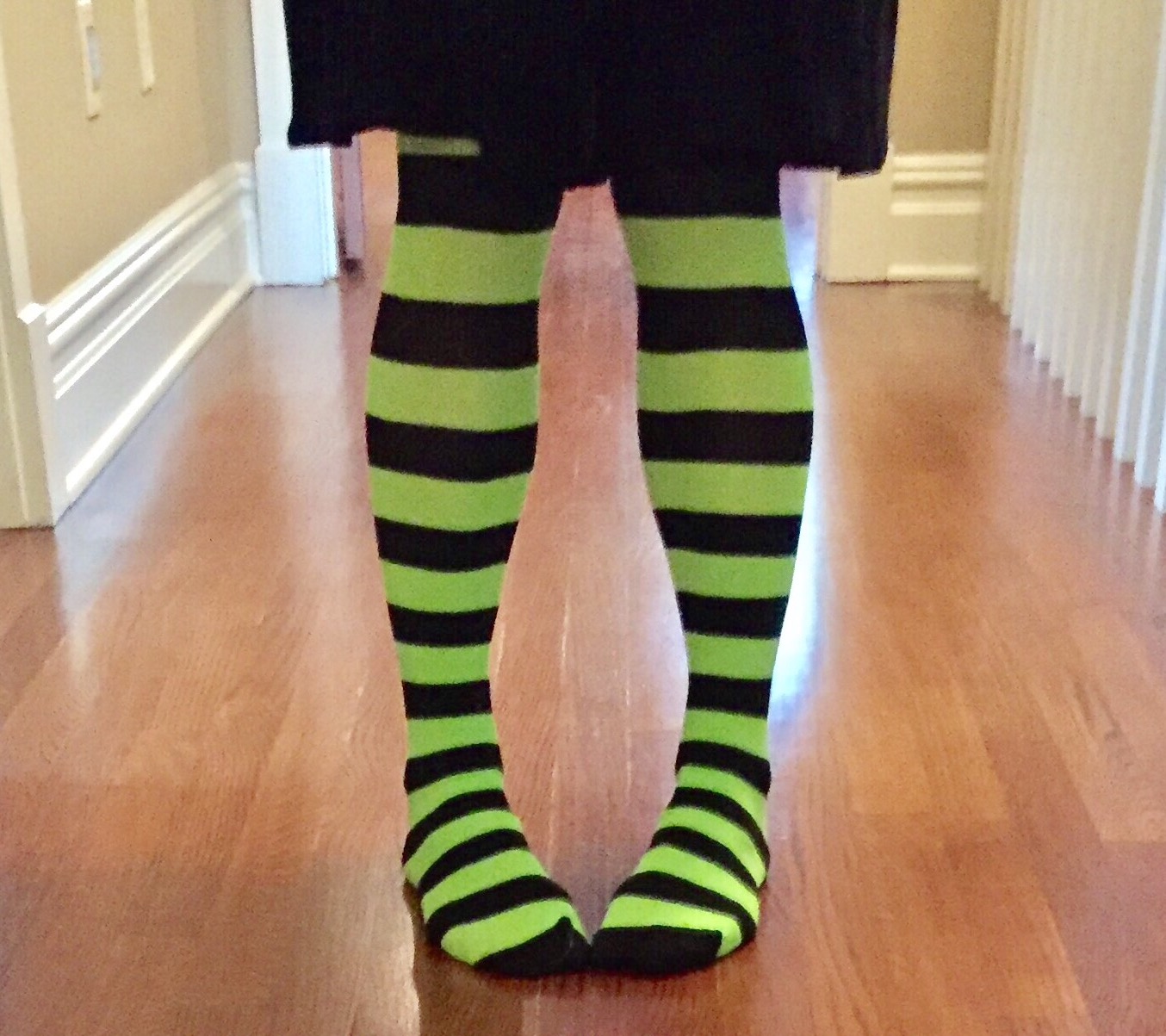 Having more than one child means constantly resetting the bar when it comes to parenting. Multiple children with different personalities and needs dictate decisions that suit each individually: what one child is ready for at one age, another may not be. As a parent, my standards shift with age too — what I frowned upon at one stage of motherhood may become completely passable as I, ahem, mature. With my older two children ten and eight years older than my youngest, there are things I never would have allowed my olders to do that my four year old does without consideration. Just ask them. They have a list of “Are you kidding me?” grievances that range from the youngest being allowed to eat as many cookies as he wants to my accommodating his every whim. In my defense, I don’t think they remember with factual accuracy their first four years. And, they can judge all they want but they’re usually walking into my twelfth hour of negotiations with the toddler; I’m worn down. But even I had to admit that this Halloween perfectly encapsulated the difference between how I parented then vs. how I parent now. If nothing else, I’ve learned to ‘never say never,’ but Halloweens of years past might have looked a little different. Here’s how I once might have hoped the day would go versus how it actually went, after as-needed edits were made along the way:

My youngest child’s social life is afterthought right now. He has his time with friends in preschool but, when he comes home, he usually has to roll with everyone else’s schedule — their school pick-ups, their practices, their games, their homework and their friends. After repeatedly asking me, “Who am I going trick-or-treating with?” I noticed that no matter how enthusiastically I answered “Me!” he wanted a different answer. He kept cocking his head to the side, as if looking for someone behind me and asking, “But who else?” So, at the last minute, I got my act together and invited two little friends to join us for early trick or treating. Sure, they went out early to accommodate other schedules. Yes, they were the first and only children out at that time. But, they had fun being together. Until….

I had billed this trick-or-treat play date as an epic event. He was so excited; we were going to canvas the neighborhood with his own friends. However, minutes before they were due arrive my son became pale and listless. A few years ago, I might have erred on the side of caution and kept him home, sent his friends away. Instead, child number three got stuffed into his “army guy” costume, handed a treat bag and sent out the door with a pat on the behind and a “Go get’em!” Halfway around the block, when he started whimpering he didn’t want to walk anymore, I didn’t head home. I picked him up and carried him the rest of the way. He still collected candy as I held him in my arms. After all, as the third child, he might have been sick but he would not miss out on candy, or I knew that there would be hell to pay later. Which leads me to…

So, now, I’d become “that mom.” The one who invited children over and exposed them to her sick son. After trick-or-treating came to a premature end, we came back to my house where my youngest promptly shed his costume. Despite his sluggish, anti-social behavior, I still was awkwardly trying to act like everything was fine and offered water and treats to our guests before they left. My son pulled a packet of Sour Patch Kids from his bag and, figuring that this could help him power through five more minutes of social exchange, I opened the bag and handed it back. At that moment, his symptoms went from unidentifiable-general-malaise to vomiting. Our friends politely ran for the door, and my son got on the couch where he had wanted to be all along. But then he rallied, so…

By six-thirty, after watching three hours of Spongebob Squarepants (), he was back on his feet. It was dark and each time the bell rang, he ran to answer it and hand out goodies. The realization that he was missing out began to set in, and he wanted to get back into his costume and out into the neighborhood. We debated, and eventually I conceded. Another four or five houses wouldn’t hurt him and maybe we could salvage what was left of the holiday. Even better, an opportunity arose…

After contending with a cranky, marginally sick toddler for the afternoon, I had fallen out of the Halloween spirit. I was tired. Just as I was putting on my jacket, my daughter and her friends rang the bell. They were dressed as zombies, cats and ninja turtles, but all I saw was a pack of babysitters. I dropped a giant fistful of candy into each of the girls’ bags, pushed my son out the door and shouted, “Somebody hold his hand!” By the time he returned, my twelve year old and his friends had stopped in for pizza. Energized by candy, and no sign of illness, my youngest happily joined the scrum of seventh grade boys… 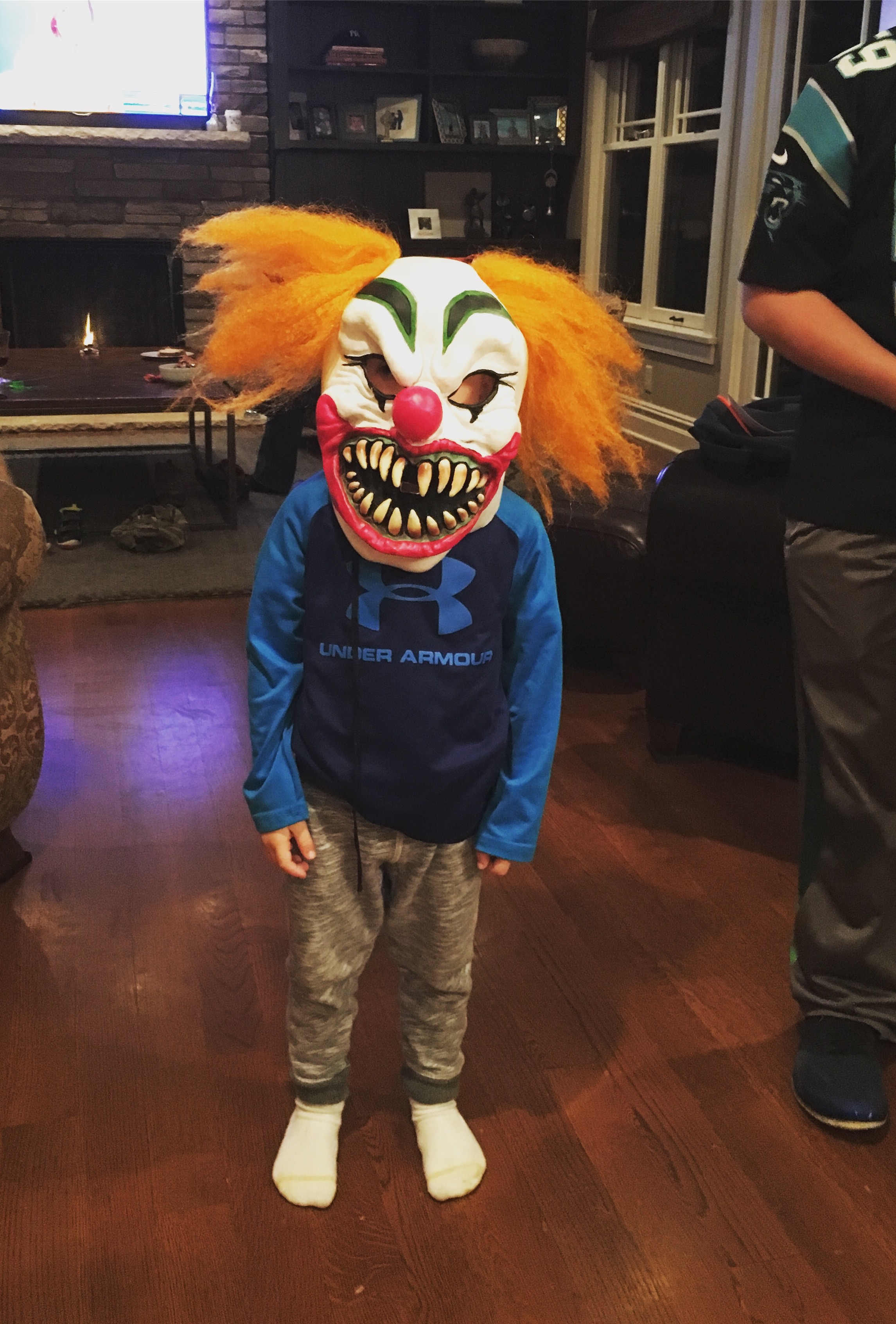 I’m going to let this image speak for itself. Suffice it to say, I wouldn’t get any closer to him even to take the picture. This is when I realized things may have spun out of control.

So, despite my insistence to the contrary, my older children may be onto something — I may be getting a little too lax with the third child. Maybe it is because I have less of the energy needed for discipline, maybe I’m just older and I’ve already come out of toddlerhood with two children, maybe the juxtaposition of teenage problems and four year old issues keeps things in perspective, or maybe it’s a general faith that my nurture and his nature will work itself out. . What I do know is that, so often, parenting is about letting go. Unreasonable expectations and hard-set rules seem a good enough place to start.