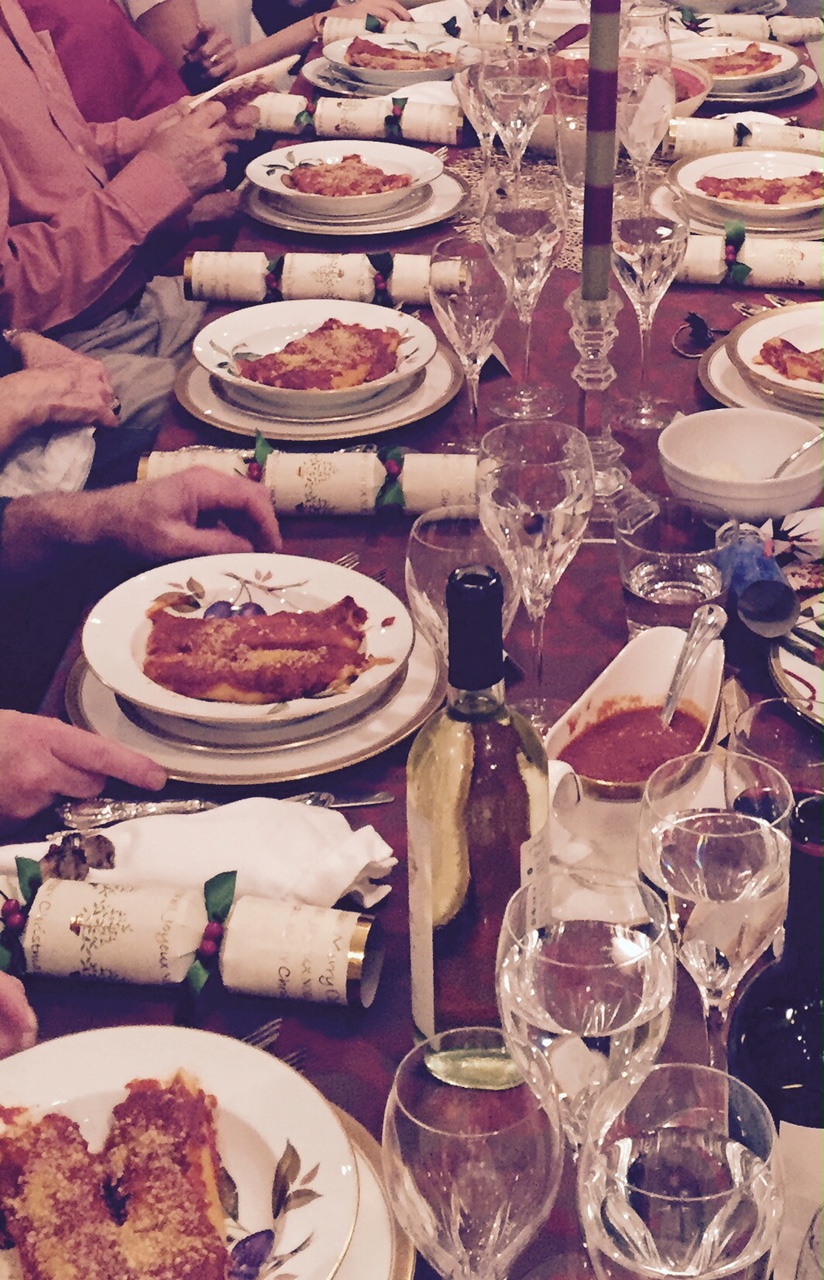 The problem with hosting a big holiday meal is that there’s a ton of food in the house but nothing to eat. All planning and energy is focused on the Christmas feast, so this week’s dinners get the short shrift. Yet each night, everyone — myself included — expectantly shows up at the kitchen table ready to eat. Last night, I made Mark Bittman’s toasted garlic with broccoli rabe over pasta which was a perfect meal for an otherwise hectic week: it was delicious, filling and, most importantly, came together in about thirty minutes. The general consensus was:  1) it’s a keeper, I should make it again, 2) maybe use fewer breadcrumbs, and 3) I should add the breadcrumbs toward the end of cooking to keep them from softening. Personally, my feeling was that: 1) I loved it, I liked the creamy texture the bread crumbs took on after mixing with the pasta, 2) I wouldn’t really change anything, though I did add a little chicken broth to the broccoli rabe to cut the bitterness (in truth, I added it because I had some leftover and was happy to finish it up and free up some prime real estate in the fridge), and 3) there are a lot of opinions in my kitchen.

Nowhere is this more evident than when planning Christmas dinner. Of course, the meal is ultimately about being together — it is really the people around the table that matter. But platitudes only go so far. Ultimately, what’s on the table matters and there are a lot of opinions about what is on the table. Deciding what to prepare is fraught with personal tastes, family traditions, as well as an account-taking of what every family member has eaten for 36-hours prior to the meal. And, if ever I thought I was overthinking the menu, the evidence to the contrary lies in my Irish meat-potatoes-and-niblets-husband, who seems to feel the pressure every bit as much as I do (I don’t know whether to shed a tear of pride that he’s adopted my family food traditions, or to flat-out cry because oh my God, there’s another cook in this kitchen).

The general framework remains the same from year to year, and the first two courses are generously provided by my parents. For an appetizer, my father makes a fish salad. It is a bright mix of squid — body and tentacles– shrimp and celery, chilled in a lemon and oil dressing and has always been an abbreviated homage to his Italian heritage — a stand-in for missing out on the traditional feast of the seven fishes. With this course, gifts are opened, drinks are served and the day begins. When we finally move to the table, we move on to the pasta course which is, truth be told, the real Christmas showstopper. Children may look forward to getting presents from Santa, but I cannot wait for my mother’s manicotti. Less a pasta shell, and more a crepe, she makes the dish from scratch on Christmas morning. The manicotti is light, pillowy, savory and baked in until the edges are bubbling. This dish is proof that my Irish-German-Norwegian mother can totally hang with her in-laws, despite lacking a vowel at the end of her maiden name.

These are tough acts to follow, so the decision of what to serve next and how to prepare it is hotly debated by my husband and I in the days leading up to the meal. As with many traditions, it’s unclear exactly how they started but they certainly endure. Take, for example, my late grandfather’s distaste for turkey — once a year was more than enough for him, so any big fowl was long ago stricken from the menu options and we’ve never looked back. Every so often, my husband suggests Cornish game hens and my knee-jerk reaction is No. Doesn’t he know the no-fowl rule? Those are like little turkeys. The last few years, we’ve dabbled in beef tenderloin prepared with a dry salt brine, but cooking times varied so widely it became unpredictable, plus my husband tired of it. A labor intensive veal breast, not worth it. Stuffed pork, delicious but the chops are so big and everyone is so full. And, one year we even experimented with a more casual family-style entree of chicken scarpariello, under the assumption that no one is really all that hungry by 5 o’clock on Christmas Day, so why not put out some comfort food? No. Just no. People don’t want weeknight dinner on Christmas Day. Also: see aforementioned poultry rule. Then there are the side dishes, patchworked together from old recipes and new traditions: my aunt’s potato dish that I miss on Thanksgiving, so she brings it for me on the Christmases she comes to our house, I LOVE IT; my grandmother’s stuffed artichokes, she only used the small ones so the choke is easier to remove but I still find them tedious to make for a crowd; carrot souffle that has been adopted from a dear friend’s Passover meal, bright and sweet; and a green vegetable, not string beans because my late father-in-law didn’t like them.

Over the years, my husband has become a phenomenal cook, so his involvement in not just the planning but the actual preparation has grown. The kitchen is where we depart from our everyday personas. Whereas I’m usually an easy-going, make-a-plan-as-I-go type in real life, in the kitchen, I’m a devout recipe follower. As for my husband who is usually a carefully planned, tightly orchestrated person, the kitchen is his place to wing it. You can imagine how this plays out, but we haven’t had an irreparable roast, or argument, yet. This year, we’ve decided on Melissa Clark’s slow roasted pork shoulder. I’ve never made it, so I have some concerns. My husband has been too consumed with work to think about it, but I’m sure by Sunday, he’ll be at the ready, with lots of opinions and suggestions — and I’ll, of course, bristle and consult the recipe.

Essentially, each year is the same — and always a little different too. Christmas dinner, like many a well-planned meal, becomes a study in who we are, who we were, who we want to be, what we’ve lost and what we’ve gained. And it better be good. The food matters. Because, God willing, the same faces will be around the table next year, maybe even a few new faces, and you know they’re all going to have opinions. Wish me luck.

What meals are you planning? No matter what or how you celebrate, my holiday wish for you is to have loved ones around your table and delicious food on your plate. Thank you always for reading the blog — if you haven’t already signed up to have posts emailed directly to you, give yourself the gift of subscribing (if you read on your phone, scroll all the way down to enter your email address). Happy holidays!