My four year old whacked his head on the coffee table not once but twice this morning. He now has matching eggs on the front and back of his head — the one on the bridge of his nose giving him an uncanny resemblance to a Klingon. And, though we’ve been down this road before with him — he tends to throw his whole body into whatever he’s doing, sometimes that means missing his mark with staggering force — I still ran through the concussion checklist in my head as I held ice on his. Vomiting, no. Drowsiness, no. Disorientation, no. Irritability, hell yes. Very-strong willed, full of opinions and four is sometimes a rough combination that make him still prone to fits of rage and crying jags when things aren’t going his way. Normally, I try to diffuse his angst but, lately, I feel a little envious of his unabashed freedom to stamp his feet. Adults are expected to deal with frustration gracefully, but sometimes it’s not so easy. Instead of discouraging his behavior, I want to say, “I know, buddy, I feel you.”

It has been a summer of detours. And, as a perennially late person, being constantly rerouted by street closures and road work can cause a tremendous amount of frustration. And though I mean this literally — every day on local roads there is a big orange sign redirecting me — I feel it metaphorically as well. 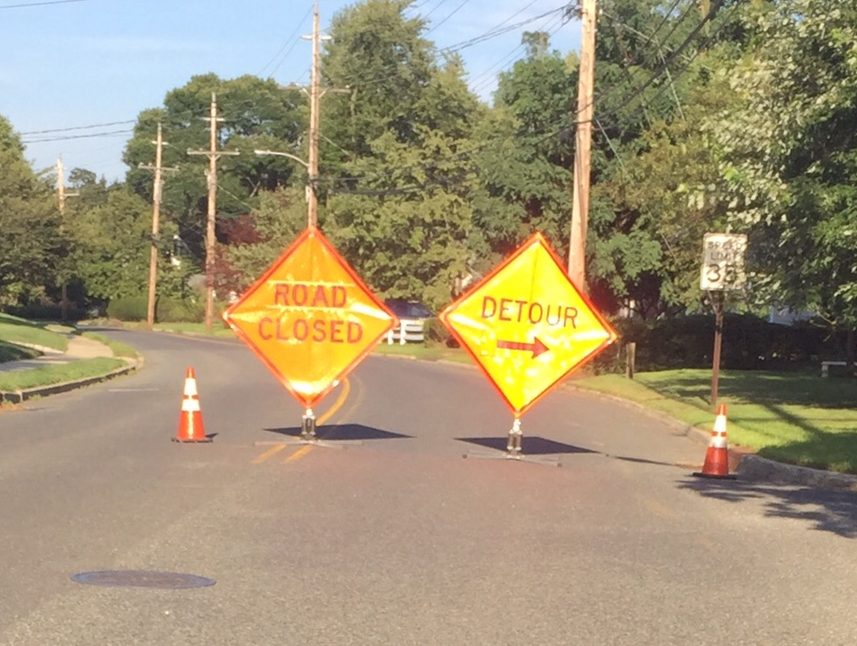 My husband is only a few short months into a new business. It has been both exhilarating and challenging, and it has impacted almost every facet of our lives. While he is pouring his entire being into the business, my role at home remains steady. However, as the children get older I feel my position constantly shifting, center to off-center. Relationships with peers are their priority; I teeter somewhere between nagging parent and confidante, never knowing which role they will assign me each day. A bit to my surprise, my mild mannered middle son is turning into an adolescent who is testing his boundaries and pushing back constantly. And it feels as though my plans are always being altered or tweaked in some way to accommodate the needs of others. Though I assume that most of these circumstances are temporary, as detours are, I’m not always sure where the road is leading.

I’m trying to roll with the changes and navigate the roadblocks. But there are times I feel my normally calm demeanor slipping into skittishness. Minor inconveniences have rerouted me: the coolant level on my car has been repaired twice with unplanned stops at the service station; at this point, I’m pretty sure the car is just messing with me. There’s a rumored rodent infestation in our neighborhood that has me jumping out of my skin when I see even the slightest movement out of the corner of my eye. Between that and a sickly raccoon sighting, getting the kids from the front door to the car has become an exercise in tactics akin to moving a troop of soldiers through a war zone. And sleep has become a rare commodity. With two kids who are staying up later and a husband who is waking before dawn, I doze somewhere between the night-life of teenagers, the four a.m. alarm clock and an early rising toddler. Add into all of this to the need to parade around in a bathing suit for three months and, whether I realize it or not, there has been a steady undercurrent of frustration that tries my patience. Unlike the four year old, I’m supposed to handle these annoyances like an adult, which is to say not have a tantrum.

But when my son’s math tutor rang the bell last week, I had forgotten she was coming despite the fact that she’s come every Monday all summer. Moments earlier, I had been thinking that my failure to get the non-shedding dog groomed was leading to an inordinate amount of shedding. So I was slightly embarrassed by the state of my house and the state of my semi-clothed toddler, but no matter. The tutor has a four year old and a dog. She’s cool. I would simply vacuum as they worked in the other room, order would be restored and she’d probably think no less of me.

An hour later, after multiple texts back and forth with my sister and several google searches, I had disassembled the vacuum. The detached hose lay out on my counter and my usual repair techniques involving hangers and butter knives had proven futile. The tutor had left, my house was still in disarray, the vacuum in pieces, the toddler now naked. There was one thing left to try: I started banging the hose against the counter, the egg rattling loudly with each whack. In each swing, I could sense millimeters of progress. The egg was moving closer to the mouth of the tube and, more importantly, hitting crap was making me feel better. Finally, out dropped the egg with a ch-ch-ch-ch as it rolled wobbly across the floor. And, regaining my composure, I breathed a sigh of satisfaction.

The sickly raccoon is still MIA, I’m getting emails from the high school about exam schedules, meal cards and how to cope with stress (did they read my mind?), kids continue to grow and push me away, and our collective energy is still being put into the business. The coolant light is on again, and now the car radio occasionally freezes, so that I’m forced to listen to “Me Too” by Meghan Trainor in its entirety, which is its own form of torture. There will be more detours ahead but I’ve gotten pretty good at being rerouted, minor fits of frustration notwithstanding. The seasons are changing, which means I can put the bathing suit away. And that skittering I see out of the corner of my eye? Fallen leaves. I still won’t #slay. Eventually, the four year old will outgrow the tantrums but, for now, I can’t hear him over the vacuum.